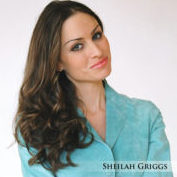 BEST WAY FOR WOMEN TO COMPETE:  Don’t! Women think differently than men and start businesses for different reasons than men. It’s not better or worse, it’s just different. When you begin to embrace that, you realize you are bringing something unique to the table.

GREATEST OBSTACLE OR CHALLENGE FOR MOST WOMEN: Asking for help seems to be the strongest obstacle for women. We are so used to doing things on our own, and for everyone else. Our roles as wife, mother and caretaker have programmed us to think about everyone else before ourselves. 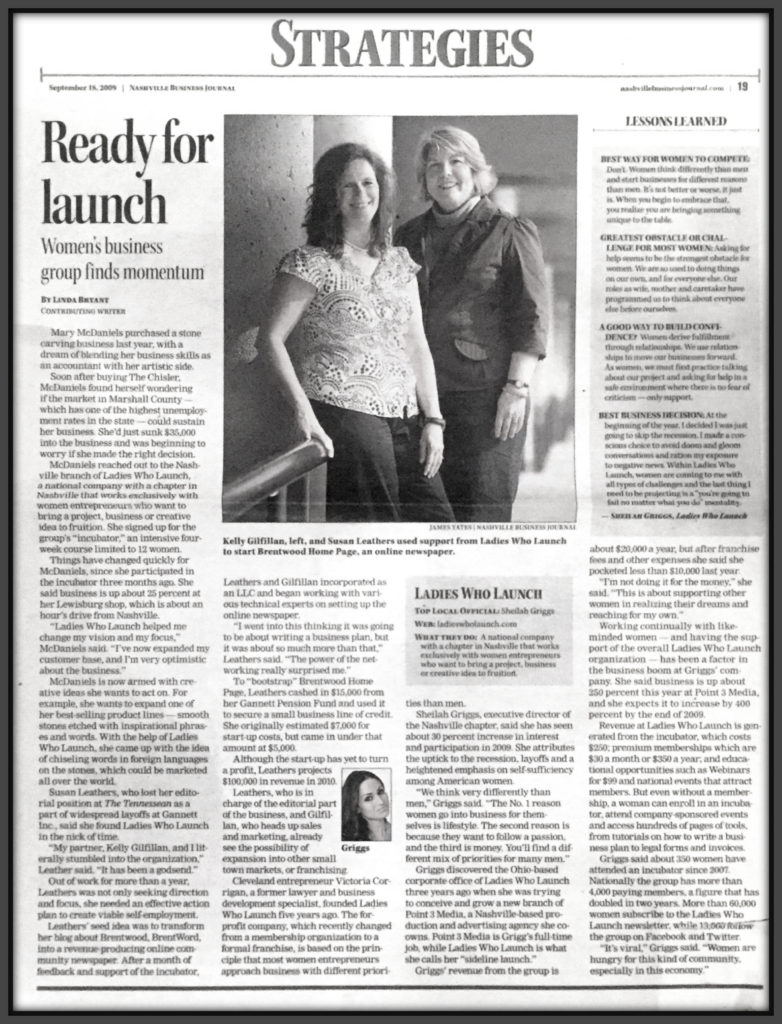 A GOOD WAY TO BUILD CONFIDENCE?  Women derive fulfillment through relationships. We use relationships to move our businesses forward. As women, we must first practice talking about our project and asking for help in a safe environment where there is no fear of criticism only support.

BEST BUSINESS DECISION: At the beginning of 2009, I decided I was just going to skip the recession. I made a conscious choice to avoid doom and gloom conversations and ration my exposure to negative news. Within Ladies Who Launch, women are coming to me with all types of challenges and the last thing I need to be projecting is a “you’re going to fail no matter what you do” mentality.

Top Local Official: Sheilah Griggs
What they do:  A national company with a chapter in Nashville that works exclusively with women entrepreneurs who want to bring a project, business or creative idea to fruition.

Mary McDaniels purchased a stone carving business last year, with a dream of blending her business skills as an accountant with her artistic side.

Soon after buying The Chisler, McDaniels found herself wondering if the market in Marshall County which has one of the highest unemployment rates in the state could sustain her business. Shed just sunk $35,000 into the business and was beginning to worry if she made the right decision.

McDaniels reached out to the Nashville branch of Ladies Who Launch, a national company with a chapter in Nashville that works exclusively with women entrepreneurs who want to bring a project, business or creative idea to fruition. She signed up for the groups incubator, an intensive four-week course limited to 12 women.

Things have changed quickly for McDaniels, since she participated in the incubator three months ago. She said business is up about 25 percent at her Lewisburg shop, which is about an hours drive from Nashville.

Ladies Who Launch helped me change my vision and my focus, McDaniels said. I’ve now expanded my customer base, and I’m very optimistic about the business.

McDaniels is now armed with creative ideas she wants to act on. For example, she wants to expand one of her best-selling product lines smooth stones etched with inspirational phrases and words. With the help of Ladies Who Launch, she came up with the idea of chiseling words in foreign languages on the stones, which could be marketed all over the world.

Susan Leathers, who lost her editorial position at The Tennessean as a part of widespread layoffs at Gannett Inc., said she found Ladies Who Launch in the nick of time.

My partner, Kelly Gilfillan, and I literally stumbled into the organization, Leather said. It has been a godsend.

Out of work for more than a year, Leathers was not only seeking direction and focus, she needed an effective action plan to create viable self-employment.

Leathers seed idea was to transform her blog about Brentwood, BrentWord, into a revenue-producing online community newspaper. After a month of feedback and support of the incubator, Leathers and Gilfillan incorporated as an LLC and began working with various technical experts on setting up the online newspaper.

I went into this thinking it was going to be about writing a business plan, but it was about so much more than that, Leathers said. The power of the networking really surprised me.

To bootstrap Brentwood Home Page, Leathers cashed in $15,000 from her Gannett Pension Fund and used it to secure a small business line of credit. She originally estimated $7,000 for start-up costs, but came in under that amount at $5,000.

Leathers, who is in charge of the editorial part of the business, and Gilfillan, who heads up sales and marketing, already see the possibility of expansion into other small town markets, or franchising.

Sheilah Griggs, executive director of the Nashville chapter, said she has seen about 30 percent increase in interest and participation in 2009. She attributes the uptick to the recession, layoffs and a heightened emphasis on self-sufficiency among American women.

We think very differently than men, Griggs said. The No. 1 reason women go into business for themselves is lifestyle. The second reason is because they want to follow a passion, and the third is money. You’ll find a different mix of priorities for many men.

“This is about supporting other women in realizing their dreams and reaching for my own,” says Griggs.

Working continually with like-minded women and having the support of the overall Ladies Who Launch organization has been a factor in the business boom at Griggs company. She said business is up about 250 percent this year at Point 3 Media, and she expects it to increase by 400 percent by the end of 2009.

Its viral, Griggs said. Women are hungry for this kind of community, especially in this economy.