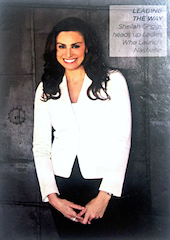 With Sheilah Griggs at the helm, aspirations take flight.

Recording artist Debbie Cunningham used it to launch her singing career. Danielle Griggs used it to transform an experience with her daughter into a business. And entrepreneur Whitney Ferré used it to turn an idea into a published book. 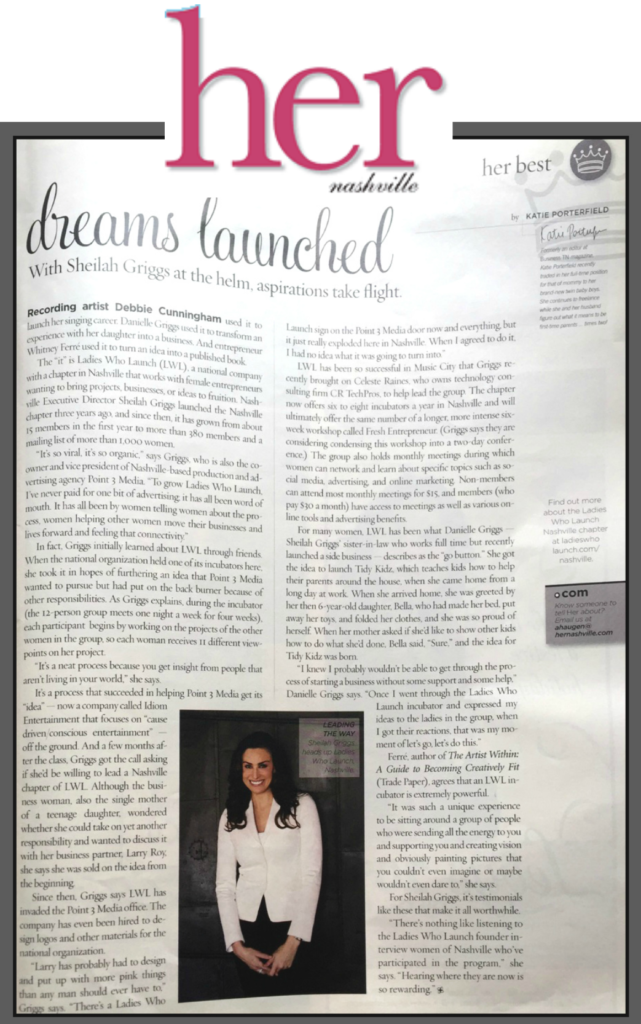 The “it” is Ladies Who Launch (LWL), a national company with a chapter in Nashville that works with female entrepreneurs wanting to bring projects, businesses, or ideas to fruition. Nashville Executive Director Sheilah Griggs launched the Nashville chapter three years ago, and since then, it has grown from about 15 members in the first year to more than 380 members and a mailing list of more than 1,000 women.

“It’s so viral, it’s so organic,” says Griggs, who is also the co-owner and vice president of Nashville-based production and advertising agency Point 3 Media. “To grow Ladies Who Launch, I’ve never paid for one bit of advertising; it has all been word of mouth. It has all been by women telling women about the process, women helping other women move their businesses and lives forward and feeling that connectivity.”

In fact, Griggs initially learned about LWL through friends. When the national organization held one of its incubators here, she took it in hopes of furthering an idea that Point 3 Media wanted to pursue but had put on the back burner because of other responsibilities. As Griggs explains, during the incubator (the 12-person group meets one night a week for four weeks), each participant  begins by working on the projects of the other women in the group, so each woman receives 11 different viewpoints on her project.

“It’s a neat process because you get insight from people that aren’t living in your world,” she says.

It’s a process that succeeded in helping Point 3 Media get its “idea” — now a company called Idiom Entertainment that focuses on “cause driven/conscious entertainment” — off the ground. And a few months after the class, Griggs got the call asking if she’d be willing to lead a Nashville chapter of LWL. Although the business woman, also the single mother of a teenage daughter, wondered whether she could take on yet another responsibility and wanted to discuss it with her business partner, Larry Roy, she says she was sold on the idea from the beginning.

Since then, Griggs says LWL has invaded the Point 3 Media office. The company has even been hired to design logos and other materials for the national organization.

“Larry has probably had to design and put up with more pink things than any man should ever have to,” Griggs says. “There’s a Ladies Who Launch sign on the Point 3 Media door now and everything, but it just really exploded here in Nashville. When I agreed to do it, I had no idea what it was going to turn into.”

LWL has been so successful in Music City that Griggs recently brought on Celeste Raines, who owns technology consulting firm CR TechPros, to help lead the group. The chapter now offers six to eight incubators a year in Nashville and will ultimately offer the same number of a longer, more intense six-week workshop called Fresh Entrepreneur. (Griggs says they are considering condensing this workshop into a two-day conference.) The group also holds monthly meetings during which women can network and learn about specific topics such as social media, advertising, and online marketing. Non-members can attend most monthly meetings for $15, and members (who pay $30 a month) have access to meetings as well as various online tools and advertising benefits.

For many women, LWL has been what Danielle Griggs — Sheilah Griggs’ sister-in-law who works full time but recently launched a side business — describes as the “go button.” She got the idea to launch Tidy Kidz, which teaches kids how to help their parents around the house, when she came home from a long day at work. When she arrived home, she was greeted by her then 6-year-old daughter, Bella, who had made her bed, put away her toys, and folded her clothes, and she was so proud of herself.

When her mother asked if she’d like to show other kids how to do what she’d done, Bella said, “Sure,” and the idea for Tidy Kidz was born.

“I knew I probably wouldn’t be able to get through the process of starting a business without some support and some help,” Danielle Griggs says. “Once I went through the Ladies Who Launch incubator and expressed my ideas to the ladies in the group, when I got their reactions, that was my moment of let’s go, let’s do this.”

Ferré, author of The Artist Within: A Guide to Becoming Creatively Fit (Trade Paper), agrees that an LWL incubator is extremely powerful.

“It was such a unique experience to be sitting around a group of people who were sending all the energy to you and supporting you and creating vision and obviously painting pictures that you couldn’t even imagine or maybe wouldn’t even dare to,” she says.

For Sheilah Griggs, it’s testimonials like these that make it all worthwhile.

“There’s nothing like listening to the Ladies Who Launch founder interview women of Nashville who’ve participated in the program,” she says. “Hearing where they are now is so rewarding.”